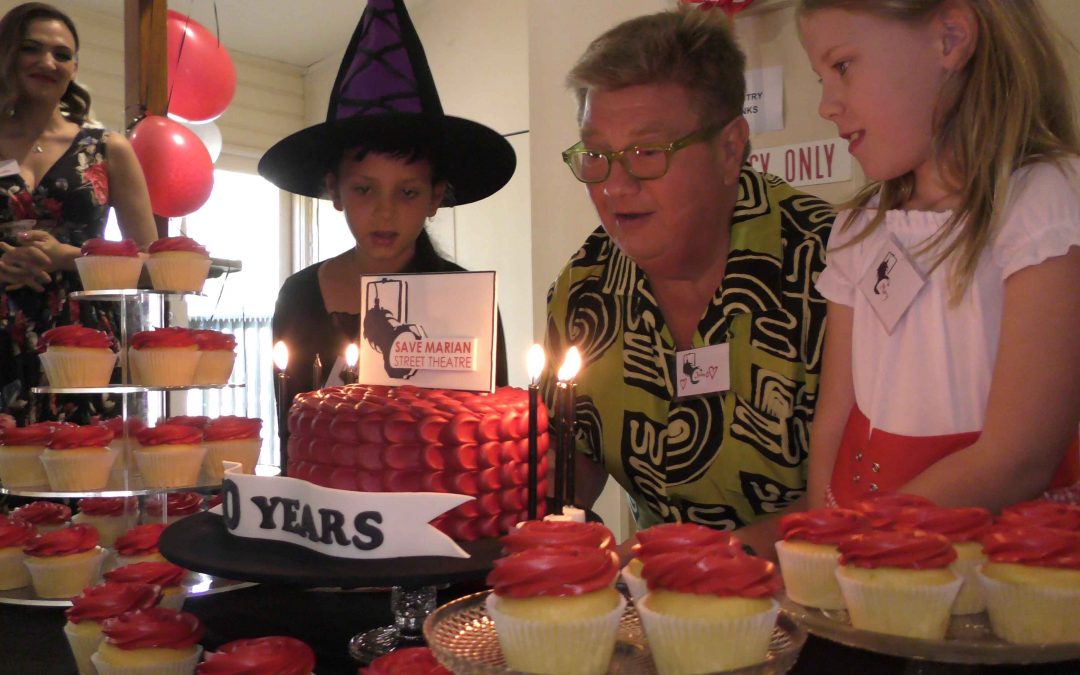 Marian Street Theatre had its 50th birthday last Thursday with a special celebration in its foyer as part of the campaign to reopen the treasured building as a cultural and community hub. It has been closed for over three years now, but on Thursday, this grand old dame of a theatre was decked out in style. The foyer was filled with balloons, streamers and photos of past productions and stars of the stage, and the most gorgeous 50th Birthday cake provided by Daniella Buttrose from Buttercreme Lane.

The doors to the theatre remained shut with red ribbons – like a tantalising present just waiting to be opened.

Local celebrity Jonothan Coleman OAM (better known as ‘Jono’ on radio and at Channel 10) hosted the event as founding patron of the Save Marian Street Theatre campaign.

The esteemed David Williamson, Australia’s most produced playwright, has also come forward as the second patron of the Save Marian Street Theatre committee. “This theatre has a special place in Sydney’s theatrical history. It has seen so many great productions which delighted audiences in the immediate community and from further afield,” in a quote read at the event.

David is joined in his support for this initiative by many including Hugh Jackman, Jessica Rowe, Sarah Harris, Craig Bennett, Angela Bishop, Joe Hildebrand, Ita Buttrose, Craig Bennet and Paula Duncan. Both the Mayors of Ku-ring-gai and Hornsby spoke, with Nancye Hayes as guest speaker. There was a huge turn out from the community, including representatives from Marian Street Theatre for Young People and the Ku-ring-gai Philharmonic Orchestra. Everyone expressed their desire to see it reopened.

The theatre has a long and rich history. Alexander Archdale created Marian Street Theatre in 1966 as Australia’s first professional repertory theatre. Actors such as Ruth Cracknell, Georgie Parker, Jackie Weaver, Bunny Gibson and Ron Haddrick appeared here. The theatre’s doors were closed in 2013 for urgent repairs. The building itself though dates from 1906, the year in which Ku-ring-gai Council was also formed.

The most surprising moment of the afternoon was the speech made by the Mayor of Hornsby Steve Russell announcing that Hornsby could provide the ongoing costs for the theatre, should the two Councils be merged. Gasps and a huge round of applause greeted the Mayor who won himself an adoring crowd, while also announcing simultaneous plans for a Hornsby cultural precinct. This was music to the ears of the community who have been starved of a local space to perform in, as Ku-ring-gai Council has repeatedly not been forthcoming with the funds to either renovate or operate the iconic, well-loved Marian Street Theatre. A study by the Council found that 72% of the community wished to have a local performing arts space like the iconic building.

Nancye Hayes added her support; “whenever I see this building it makes me very sad. To see this building shut when so much great work was done here is a great loss to the community. I look forward to seeing it opened again.”

The community turned out in style, with small children all dressed up, budding actors and locals all coming to support. Deirdre Burges, a previous designer who trained at Marian Street Theatre met her now husband backstage. “We met over dirty paintbrushes,” she joked. “I had not washed them out, and the stage manager came to tell me off.” She is now married to the then stage manager Victor with two grown up sons. “She still doesn’t wash the paintbrushes out, and I still tell her off”, Victor laughs.

The event was hosted by the Save Marian Street Theatre Committee who aims to raise the support to reopen the theatre as a sustainable community and cultural hub. “You can either be creative by dancing, painting, writing, performing, or you can be creative by providing the space for others to do so. We are doing the later.” Spoke James Cadden, Chair of the committee, joined on stage by his seven-year-old granddaughter. “Reopening this building is for our future.”

To help, please sign the petition on www.change.org/p/save-marian-street-theatre or contact the Save Marian Street Theatre Committee at savemariansttheatre@gmail.com. They expect to open the Capital Appeal in 2017 to raise the necessary funds to reopen the building.