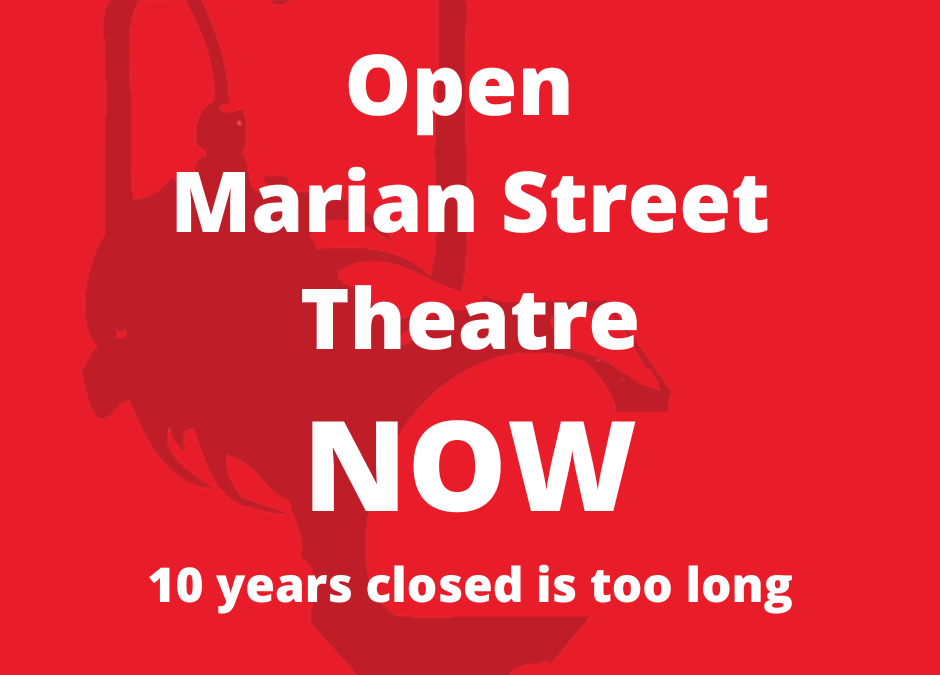 It has come to our attention that Councillor Cedric Spencer has submitted a motion to the next Council meeting to rezone and sell Marian Street Theatre. This is despite an earlier unanimous council decision to renovate the theatre and turn it into a vibrant contemporary performing arts space, a project which is almost ready to go to tender.

This motion seeks to place MST on the council’s list of ‘degraded and redundant assets’ and sell it to finance other projects that he believes are of greater importance to his community such as ‘sports fields upgrades and other infrastructure renewal’.

Although we are pretty sure Councillor Spencer does not have the majority, we must act fast to avoid further delays to this long overdue project. Continuous delays have already led to an increase in costs and deterioration of the building. We must stop this!

How you can help:

We thought the battle was won, but we obviously need to fight another round and we need your support! The Save Marian Street Theatre committee

Write to your ward Councillors

I’m [express your emotion…shocked? upset? surprised?] to hear that a motion has been proposed to rezone Marian Street Theatre to sell the land for high-density residential space.

We have been told since July 2018 that Council unanimously approved a plan to renovate the theatre into a vibrant and contemporary space for the performing arts (the type of space Ku-ring-gai currently lacks).  How can an individual Councillor now propose to get rid of the theatre? How can we trust anything will ever get done if individual Councillors can challenge plans that have already been approved? Can you let me know if and how you will respond?

Emails and Wards of Councillors:

Not sure which ward you’re in? Find out by searching your address on the Council website: https://www.krg.nsw.gov.au/My-area We suggest emailing Councillors individually. However if you would like to email all Councillors, the email address to use is councillors@krg.nsw.gov.au