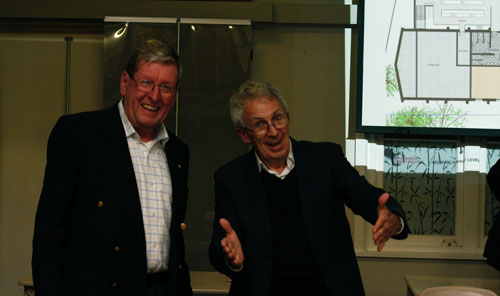 On Monday 31st July a hundred people gathered for the second monthly meeting of the Friends of Marian Street Theatre.

Councillor Szatow outlined the wonderful news that Council had voted Marian Street Theatre as the focus for theatre in Ku-ring-gai, and to give the Save Marian Street Group $37,000 to investigate the financial support in the community for renovating and re-open the theatre. The positive mood of the group was shown as people talked of their memories of the plays they had seen at the theatre before 2001. Others spoke of the generations of children in their family who had seen performances by Marian Street Theatre for Young People provided until the theatre closed at the end of 2013. It presently performs at the Knox Cultural Centre with the support of Council.

Architect Luke Playoust detailed plans for what the Committee envisages and the audience showed great interest in his inspirational ideas. These will be worked on in detail collaboratively with Council.

Keynote speaker Robert Love, Director of Parramatta’s Riverside Theatres, then spoke about how his 17 years at the helm there have shown positive benefits for the Western Sydney community. Mr Love lives in Ku-ring-gai, and was recently awarded an AM in the Queen’s Birthday honours.

Riverside Theatres’ success has just been publically acknowledged in the announcement (coincidentally the same day as this meeting) of a $100 million dollars grant to renovate the Parramatta Theatre complex; a vote of confidence from Local, State and Federal tiers of government.

Mr Love explained how Riverside Theatres at Parramatta operate, to ‘explore today’s issues, interrogate the past and look to the future’. It shows a successful model where an arts centre with performance at its core works with the Council which funds it and reaps wide benefits.

Riverside’s active complex theatre building offers a variety of activities throughout a day, and nearby businesses such as restaurants thrive. The theatre and associated cultural activities such as exhibitions, musical performances and classes provide a cultural focus for the community and also bring in visitors form the wider community and overseas. Ku-ring-gai’s recently adopted future planning proposals note that Marian Street Theatre will be important in bringing visitors to the North Shore.

The next Friends of Marian Street Theatre meeting will be held on Monday 28th August, 6-7pm at the Killara Bowling Club, and includes an exclusive jazz performance from the Sydney Improvised Music Association.