The Past, Present and Future of Marian St Theatre – September Sixty Minute Soiree 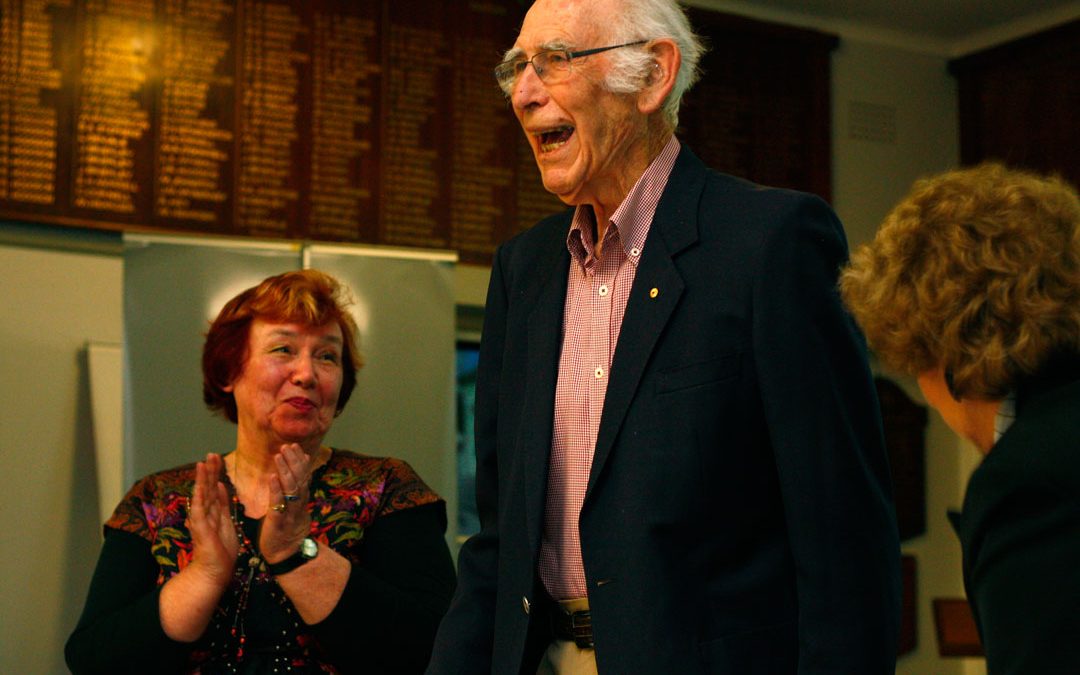 Haddrick’s Performance for the Birds

When actor Ron Haddrick was performing in the play Dracula at Marian Street Theatre in the mid 1990s producer John Krummel arranged some birds on wires above the stage.

At the chosen point all the actors stared up at the ceiling to their right to see…nothing. Someone had his or her wires crossed. Then three birds suddenly appeared on the other side of the stage – flying backwards!

That’s just one of the anecdotes with which Ron regaled Friends of Marian Street Theatre at Killara Bowling Club on September 25. The theme was “MST – Past, Present and Future”.

A long-time favourite at MST, Ron spoke of the occasion when fellow thespian Pat McDonald was taken ill and the scheduled performance had to be cancelled. Ron got home early, to the consternation of his wife, who thought he had forgotten to go back for the second act.

Perhaps the most popular show ever performed at MST was Bob Larbey’s A Month of Sundays. So popular, indeed, was it that when the last shows were scheduled a large number of subscribers still hadn’t seen it. Producer John Krummel persuaded Ron to agree to an extra show on the final Saturday, with Ron requesting an extra half-hour between shows and a mattress so he could lie down on the dressing room floor!

Unamused, one of his fellow actors stormed in saying: “If you forget your lines don’t expect us to get you out of it!” Fortunately, Ron did the three shows without faltering.

“What was unique about the Marian Street Theatre?” Ron mused. “I think it was the audience. It was a family theatre made up primarily of people who lived in the Killara area. But we also got busloads of people coming from as far away as Cronulla, and usually the whole cast would go and mingle with them.”

When Ron had finished reminiscing professional fund-raiser Evelyn Mason explained how the feasibility study she was conducting on behalf of the SMST committee and Ku-ring-gai Council operated.

Mrs Mason and her team are interviewing a cross-section of 30 people from the community – prospective donors, actors, producers and others.

“We undertake a very precise interviewing process,” she explained.

“We also have to look at whether the community is totally in line with our vision.”

Finally, SMST committee member and former Macquarie University Vice-Chancellor Di Yerbury spoke about the vision for the new Marian Street Theatre. Sixty per cent of the usage would be professional, she predicted, 30 per cent would be schools and 10 per cent might be corporate functions, in addition to art shows and other non-performing uses.

“It’s a fantastic venue, terrifically accessible, a wonderful location, and I think we can exceed the expectations of those who wrote reports for Council about visitor numbers. They thought we could get 50,000 patrons in any one year – we think we could get 100,000,” she said.

Adriaan Mees began the evening with ‘Songs from Brazil’ – Brazilian inspired guitar and vocals which held the crowd in suspense. In Adriaan’s work as a musician he covers a broad spectrum from hard-swinging scat-improvisations, via intimate ballads, to the warm sounds of the portuguese language, when he sings his brazilian material, accompanying himself on acousic guitar. Although he sometimes calls himself a jazz singer, that’s not all there is, as in fact  he spreads his musical passion over jazz, funk and brazilian music as a versatile singer / guitarist / bass-guitarist, while he also loves to play piano and percussion.